Every time I think our home has reached peak Lego, it manages to multiply some more.  You would think, living here, that it would be easy to keep new toy purchases to a minimum, and even MT (proud owner of a Lego Death Star) said a couple of months back that we could bypass it this Christmas.  But then there was a business trip to Paris, and the set the 4yo has wanted since the day he came across Big Kids playing with Big Kids’ Lego was at the top of his Santa list…then once the shopping started, there had to be at least one new Star Wars set…  I’m not complaining, ultimately it is probably the Best Toy Ever, however, the more it builds up, the bigger the pile becomes, the longer it takes to search for pieces (even if you’re not following the instructions), and the less time there is for building and creating.  So it had to be brought to order

Just a brief pause in case you think you’ve strayed into the words of a different type of blogger: much as I’d like to think of myself as a Sarah, and am probably a bit of a Cosima, there’s also a lot more Alison in me than is ideal.  (Netflix addicts will know that’s an Orphan Black reference.  If you like hugely enjoyable sci-fi hokum with one amazing actor playing all the characters, definitely worth a look.)   The central idea behind the name of this blog is that for someone who’s always cared about how my home looks and feels, all this moving around and not choosing where we live is a challenge.  I am the frustrated nester.  But the longer I’ve been doing it the more determined I am to make each place we live feel like our home and function in the way that suits us best, however temporarily.  And as we go, I’m always collecting ideas for the future forever home.  Meanwhile, the Congo nesting has begun…

I’m not very good at helping the 4yo with his building.  There’s an order to Lego that I love: beautifully designed instructions, a flawless process, the way everything just fits perfectly.  As long as we’re on message it’s fine.  But as soon as he starts changing the order, skipping stages, looking for alternative colours, I’m out.  I love the creative possibilities of Lego, the endless potential each set presents, and I know the best thing to do after a set has been built and played with, is to let the boys break it down, add it to the pile and start creating.  But…the chaos…the chaos…and what if they want to build the set again??

Well, that’s my issue.  I have two little boys.  Every day is an exercise in letting the chaos in.  But the issue of freeing up searching time for building time is a real one.  Certainly real enough for me to rationalise myself doing this: 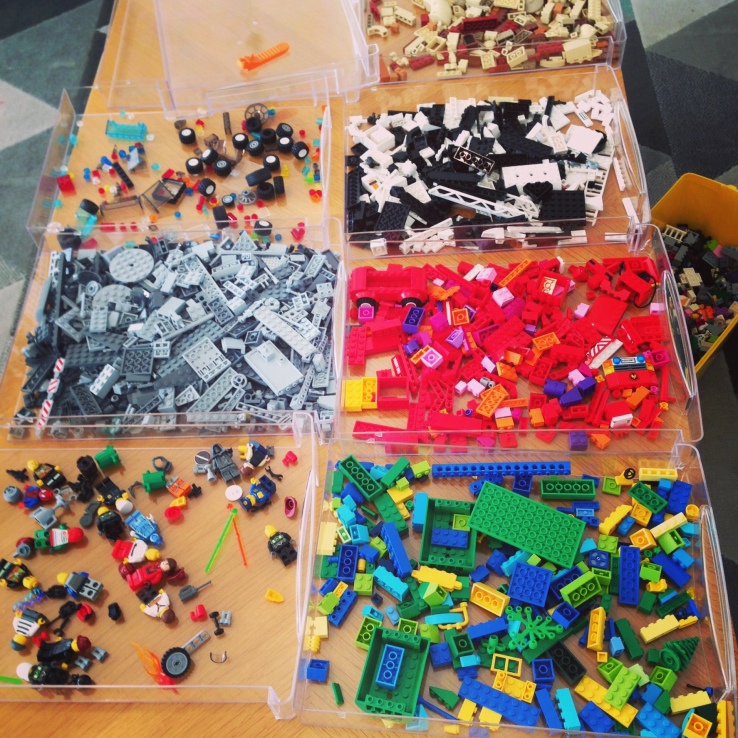 As MT came in from work I steeled myself for some mockery, but surprisingly, his eyes lit up as he dumped his backpack and settled in on the sofa for some sorting.  There’s something about colour order that appeals to all of us. 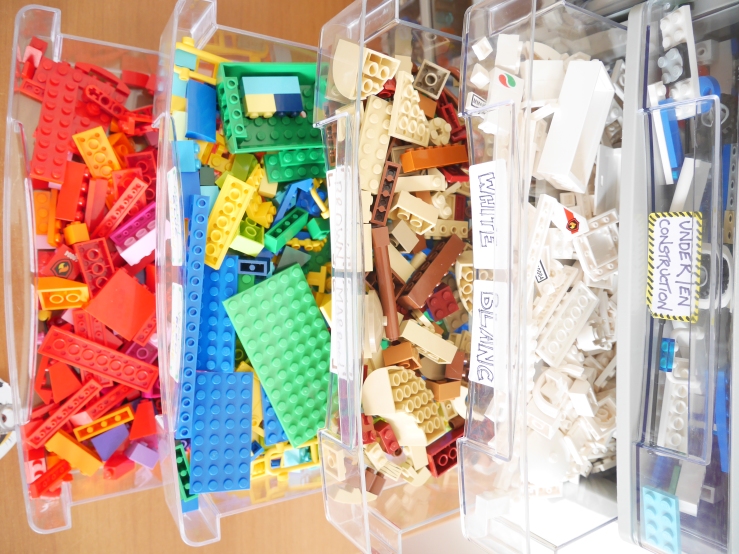 He was more sceptical about the need for labelling though.  But all organising types know that labelling seals the deal. 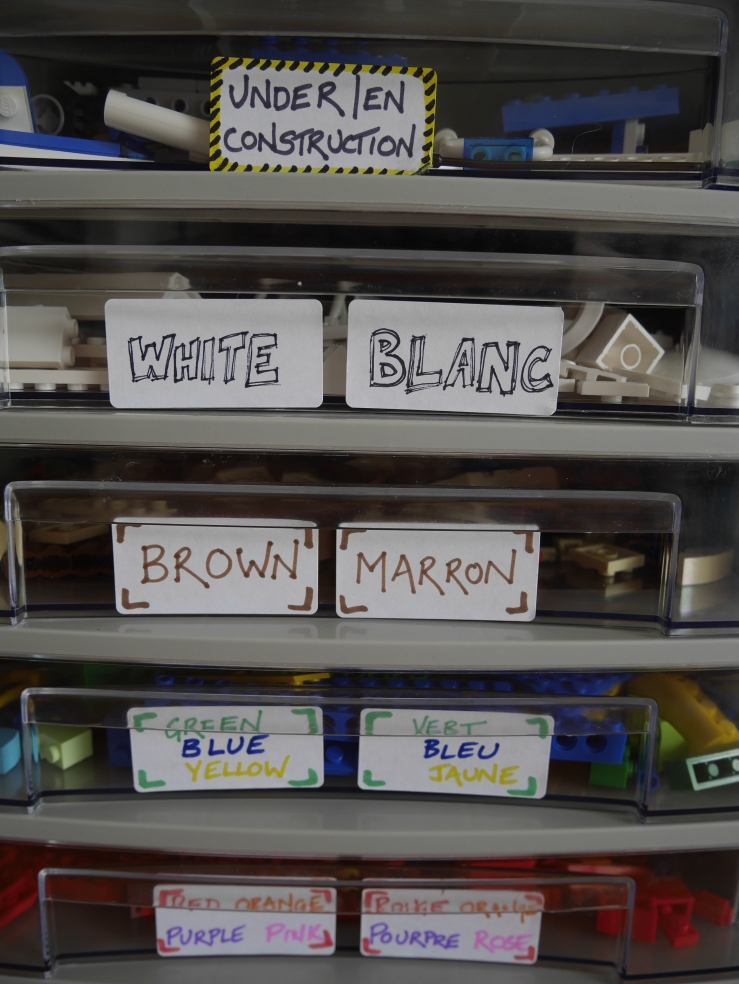 I could have printed pretty graphic labels on the computer, but I’ve tried that often enough to know that I could have lost days on searching for just the right template, formatting, picking a colour scheme etc etc.  (Not to mention the rabbit holes created by keeping email and facebook tabs open.) By pulling a pack of labels from the drawer and setting to work with some felt-tips, the project’s finished twenty minutes later.  Now everyone is a bit more motivated to Keep It That Way – but still with a miscellaneous ‘Under Construction’ drawer for the lazy moments.

My soul is quieted a little this week. 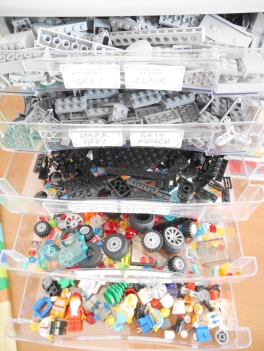 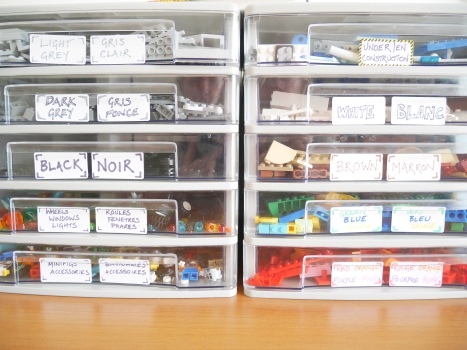 It’s a flexible system and there’s a little room for expansion, especially if we keep something substantial built all the time, for example, just now there’s a fire station being played with.  I got the file drawers from our local homeware shop, which made it pretty expensive, but it wasn’t something I was going to fit in a suitcase very easily, so I decided to make the investment in having them now rather than later.  At the moment it’s a bit utilitarian-looking, so what I will look for next time I’m travelling is some leg0-style stickers.

(It will never contain the Death Star though, which is fine, because Red Five is getting nowhere near it until the next move.  I got to blast it and pack it for the last move, and can tell you it comprises 18 litres of Lego.  Took me two trips to the shop for a big enough storage box.)

Most importantly, there’s already more creative building going on (with bonus colour coordination!) as the boys are much more motivated to try and find the piece they want rather than have to rake aimlessly through a huge pile.  And the trays can easily be removed for big building sessions. 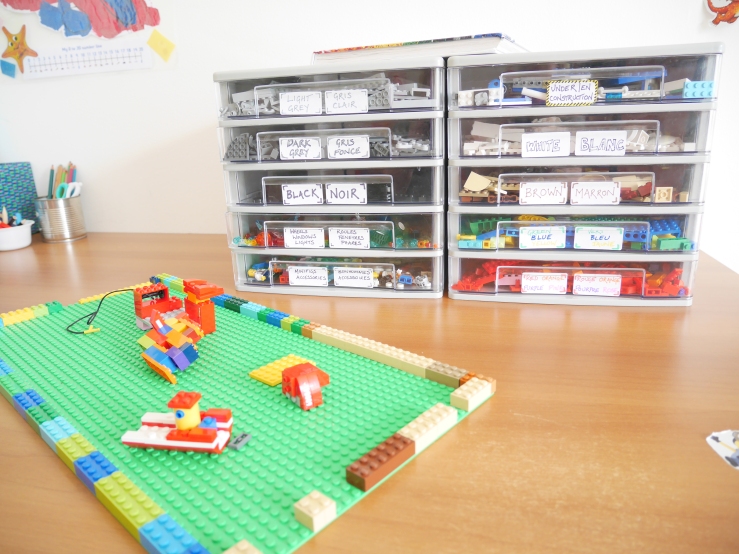 However I am planning to make a circular drawstring playmat, which I’ve seen a few examples of around the internet, most recently by the lovely Veronica Darling, so there can be a zone of chaos.

Next step though, is to figure out how to organise the instructions – any suggestions are welcome.  I tried them in a polypocket folder, but that’s proving too fiddly to put the booklets back into.  I know deep down that most of them won’t get used again, but I need the instructions.  I really do. 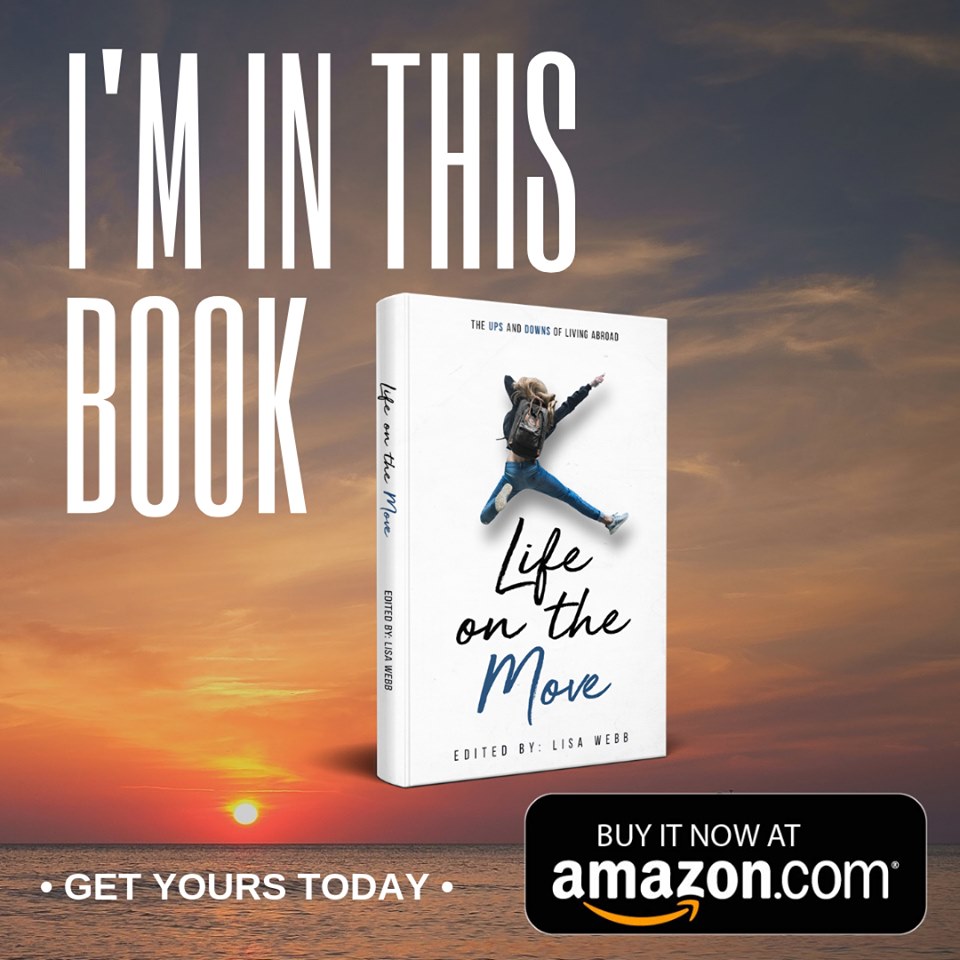 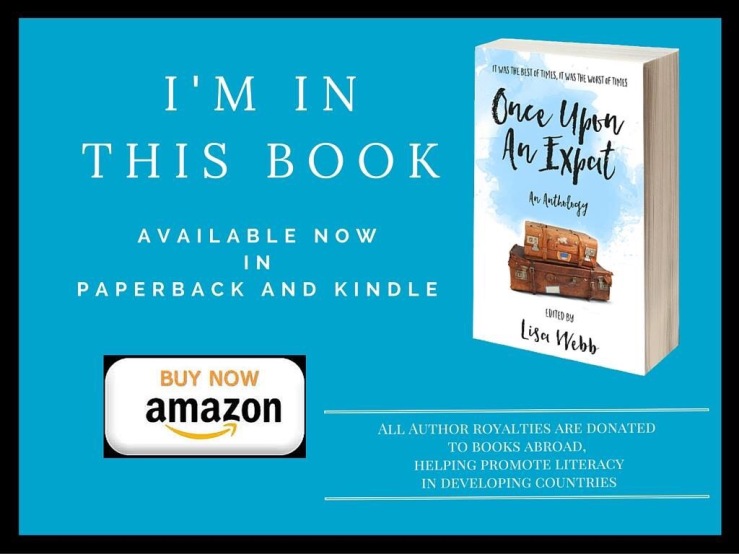